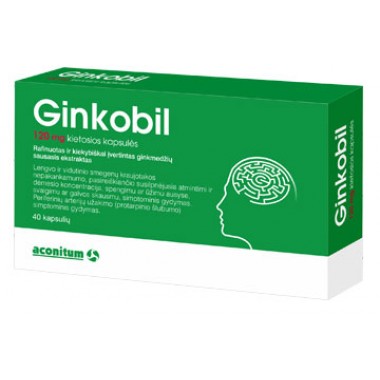 Dementia. This is a drop of intellect caused by a variety of diseases, accompanied by the damage of other mental functions and changes of perception, behaviour and other physical symptoms. This disorder can occur in case of various brain diseases and disorders, generally at an older age. It is assumed that it is caused by disturbed brain chemical metabolism. Dementia often is caused by high blood pressure, atherosclerotic vascular lesions etc.

Dizziness and ringing in the ears. It should be noted that it is not only a problem of the elderly that occurs with impaired cerebral circulation.

Cold limbs. Disruption of blood flow often leads to swollen legs, cold limbs and dizziness. Narrowing of the arteries means that less blood is delivered to the legs and arms, so they start to cool. Most often this occurs because of fatigue, anxiety, stress, fluid and micronutrient deficiency.

Ginkobil is made from refined and quantified dry extract of ginkgo, which treats: